Ever since I sank into my first class seat at Reagan National Airport, finally ready to head home, I’ve been trying to organize my thoughts on experiencing Washington, DC. I’ve decided it’s pretty much impossible and those thoughts will probably always remain, like that first sentence, a somewhat incoherent, colorful mess in my head.

Here goes an attempt to give you a glimpse.

The first four days with the DC Project were run-and-gun, no pun intended. Our days began around 5 a.m. and didn’t wind down until 10 p.m. or later. We shuttled between congressional office buildings…Russell, Dirksen, Hart, Rayburn, Longworth and Cannon. In one of those buildings, I discovered the world’s best mac and cheese.

We met with representatives and senators or their aides. Speaking of aides, did you know a bunch of smart, young college grads actually run Congress? I didn’t know either, until I saw them in action. My lasting impression is of their courtesy and expertise in answering constituent phone calls. Before I went to Washington I would never have considered calling my senator or representative. But now I would if an issue was important to me.

After three intensive days of meetings, I realized something that confirmed my basic perception of Congress: We are blessed with some politicians who are smart and well-spoken, with a genuine passion for our country. I met them and can attest to that.

We met some who vehemently disagreed with our advocacy for the Second Amendment. Some of them were courteous and some were not particularly kind. Some refused to see us. Cowards.

After the DC Project ended, I had four days to explore on my own. I saw the Declaration of Independence, the Constitution and the Bill of Rights. I can’t describe the experience of actually gazing on the documents that protect and guarantee my own personal freedom. To know they were enshrined so many years ago, and have endured to this day, is awe inspiring to me. For maybe the first time, I felt a strong connection to the men who sacrificed for untold future millions of Americans. I enjoy and benefit from their sacrificial legacy every single day.

And talk about sacrifice…the Vietnam War Memorial, the Korean War Memorial, the World War II Memorial, the Iwo Jima Memorial and finally, Arlington National Cemetery. They left me overwhelmed. Even typing this sentence, I find myself shaking my head because it’s practically impossible to comprehend the sheer number of men and women who gave everything for our country for all of us.

And they’re still doing it. Our country isn’t perfect, but we have a lot to be grateful for and proud of, too.

One of the most unexpected privileges for me was seeing the flag that flew over Fort McHenry, inspiring Francis Scott Key to write what became our national anthem. The flag resides in the American History Museum, safe and secure in a pressurized chamber, temperature and humidity controlled. Seeing that flag, knowing its history, touched me deeply. I sat and looked at it for many minutes. I will always be glad for the opportunity to see that flag.

Experiencing all the history, touring the Capitol and seeing the sights made for a special week. But the absolute best thing to come from my trip is the connections to so many accomplished women supporting our Second Amendment. I didn’t get to meet everyone but am thrilled with the friendships begun that week.

Before the trip, our local ABC affiliate in Sioux Falls, KSFY, interviewed me about the DC Project and upcoming trip. See interview here. While in Washington, just before our rally at the end of the week, Gray TV, KSFY’s owner, took the time to interview me again. It’s pretty cool that a regular person like me, who simply wants to preserve my right to defend myself if need be, actually has the ability to speak out and be given a voice. I never dreamed of standing in front of the Supreme Court building for a TV interview. Here’s the second interview in Washington. 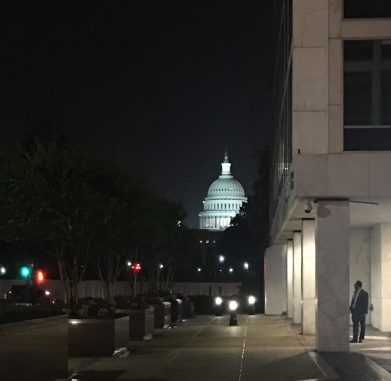 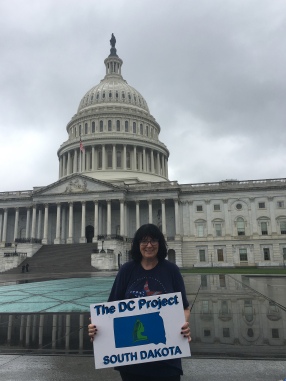 If that’s possible, then a lot more is possible when everyday, regular Americans choose to act.

Mary is the author of the Rowan Milani Chronicles, a thriller series beginning with CONSUMMATE BETRAYAL, its sequel UNHOLY RETRIBUTION, and continuing with A DIFFERENT MAN. All three titles are in print from Amazon.com and MaryYungeberg.com, and as eBooks on various platforms. Mary is passionate about inspiring women to live with purpose and pursue their dreams. She is a strong believer in empowering women to defend themselves. She loves the sport of shooting and capably handles her two Glock pistols. She lives in South Dakota with her husband. They love to travel the country in their Mustang convertible. Their Rat Terrier Lucy micromanages their lives and keeps them on their toes. View all posts by Mary Yungeberg